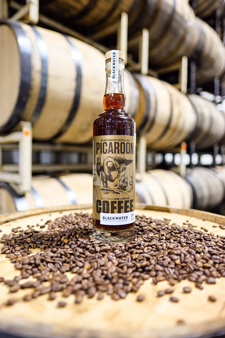 “We are always looking for ways to add a fresh approach to classic spirits and this coffee liqueur is no exception,” says Chris Cook, CEO and co-founder of Blackwater Distilling. “Blending locally roasted coffee with our crowd-favorite, award-winning Picaroon Rum resulted in a flavor so pleasing it appeals to both coffee-lovers, and surprisingly, to those who aren’t. It’s that versatility that makes this liqueur ideal for launching just before Thanksgiving; it’s the perfect pairing for festive cocktails and seasonal treats that are sure to please a wide variety of holiday guests.”

Blackwater Distilling is headquartered on scenic Kent Island, Maryland and is home to a variety of award-winning rums, vodkas, and most recently the introduction of whiskey. The family-owned business is the brainchild of brothers Christopher and Jonathan Cook who sought to resurrect the art of distilling in Maryland that fell off in the early 1970’s. Chris spearheaded statewide legislation in 2012 that essentially opened the doors for all Maryland distilleries to host onsite tours, tastings, and sales. Leading in the distilling resurgence, Blackwater has set the bar in Maryland and its spirits are highly decorated.

At the core of the new Picaroon Coffee Liqueur is Blackwater’s prized Picaroon Rum, most recently voted “Best Beverage” among Maryland rums at a state-wide competition where judges tagged it “sweet and smooth.” The rum is intentionally distilled in small batches from cane syrup rather than the more common blackstrap molasses. For the Picaroon Coffee Rum Liqueur, Head Distiller Andy Keller infuses Picaroon Rum with classic Caribbean spices like whole vanilla beans and allspice berries, and sweetens it with the same house-made caramel syrup used for Blackwater’s perennial favorite, Sloop Betty Caramel Vodka. In the final step, Blackwater cold brews coffee using single-origin Roastmaster’s Reserve beans from Maryland’s Chesapeake Bay Roasting Company. The low acidity coffee brings bright notes of orange peel to the blend of rum, spices, and natural caramel creating a complex, smooth taste that stands out from others on the market.

Picaroon Coffee Liqueur is available through Republic National Distributing Company (RNDC) in Maryland and the District of Columbia, and can be purchased at Blackwater Distilling on Kent Island at 184 Log Canoe Circle, Stevensville, Maryland, just 15 minutes from Annapolis and an hour from Washington, DC or Baltimore, MD (first exit off of the Chesapeake Bay Bridge). Picaroon Coffee Liqueur is also available at various retailers throughout Maryland and the District of Columbia. Blackwater Distilling offers tours and tastings at its distillery seven days a week from 12 p.m. to 4 p.m. with tours kicking off at the top of each hour.  Follow the company on Twitter,Instagram and Facebook.