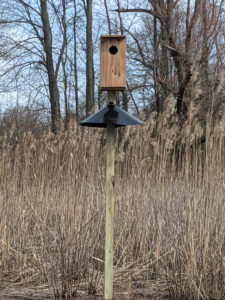 In late March, Chesapeake Wildlife Heritage (CWH) partnered with the Centreville Parks Advisory Board in Centreville, Md., to install three bluebird houses along the town’s Millstream Trail at Millstream Park, as well as four nesting boxes for wood ducks in the Mill Stream Branch that runs alongside the trail. The structures will provide critical nesting sites for these species. Andi Pupke, CWH’s education and outreach director, spearheaded the initiative along with Parks Advisory Board member Cilla Mileski.

Bluebirds and wood ducks are cavity-nesting birds, which means that a hollowed-out cavity in a tree is their natural choice for nesting in the wild. Development, aggressive species that outcompete for nesting sites, and landscaping methods that remove trees rather than leaving them as wildlife habitat have contributed to a shortage of nesting sites for both birds. Nesting structures provide artificial cavities where bluebirds and wood ducks can lay their eggs and raise their offspring until they are old enough to fledge the nest. Cone-shaped predator guards installed on the Millstream nesting boxes will protect the inhabitants from snakes, raccoons and other creatures that prey on bluebirds and/or wood ducks. CWH has overseen a robust nesting structure program for more than 35 years.

CWH is dedicated to designing, restoring and managing wildlife habitat and establishing a more sustainable agriculture. In addition to stewarding 1,150 acres in Queen Anne’s and Talbot counties that it owns and manages as wildlife sanctuary, CWH works daily with private and public landowners to help ensure the future of the region’s wildlife and the health of the Chesapeake Bay. Since the organization’s founding in 1980, CWH staff has restored nearly 2,000 acres of wetlands, planted more than 1,000 acres of woodlands and created 6,000 acres of warm season grass meadows. For more information, visit cheswildlife.org.