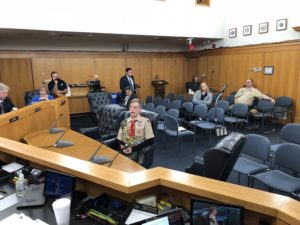 SUDLERSVILLE – As part of his quest to become an Eagle Scout, Alex Simonetti created a project that benefits the senior citizens who reside at Sudlersville’s Foxxtown Manor.

Simonetti, of Troop 175 in Sudlersville, realized that gardening at ground level was difficult for the elderly so he raised $900 to create an easily accessible raised garden. The county matched his funding and Simonetti began building.

“The seniors have access to fresh vegetables and a hobby,” Simonetti explained to the County Commissioners during their November 27, meeting.

When Commission President Stephen Wilson remarked on the multitude of badges on Simonetti’s uniform, he explained the Eagle Scout merit system. “You are a remarkable young man, sir,” said Wilson.

The residents of Foxxtown Manor have now formed a garden committee, to make the most of Simonetti’s gift.