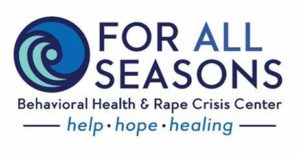 In light of social distancing and the cancellation of large public events, For All Seasons has rethought its annual Denim Day Event event for April to recognize Sexual Assault Awareness Month. As the only Rape Crisis Center on the Mid Shore, For All Seasons Behavioral Health & Rape Crisis is hosting its first Facebook Live concert on Wednesday, April 29 at 7 p.m. to raise public awareness about sexual violence and educate communities on how to prevent it. The concert will feature Lauren Hall, a Los Angeles-based singer-songwriter who most recently was featured as a Top 32 contestant on NBC’s The Voice, first being chosen by Kelly Clarkson and later being stolen by Blake Shelton.

Hall, since moving to Los Angeles from Chicago, has made her rounds singing and/or headlining at various Southern California venues such as the famous Whisky A Go-Go. Her vocals have been described as “soulful, with a touch of sass and rasp.” Her music blends soulful, strong, piano and vocally-driven songs with Pop/R&B stylings. Lauren is inspired by a large range of artists including Adele, Alicia Keys, H.E.R., Sam Smith, Lady Gaga, and Maggie Rogers. She is currently writing and recording new music and is set to release her debut EP in 2020.

“We are thrilled to have Lauren donate her time for this concert. It is an excellent way for us to reach new audiences while also spreading important information about sexual assault. We hope that our supporters, while sheltering in at home, will join us on Facebook Live on April 29 and afterward will make a donation toward our sexual assault advocacy services. As essential personnel, our staff continues to work to meet the needs of our clients on the Mid Shore,” Beth Anne Langrell, CEO of For All Seasons, comments.

Denim Day is an international day created after an Italian court overruled a 1999 rape conviction because the justices felt that since the victim was wearing tight jeans, she must have helped her rapist remove her jeans, implying consent. The next day, women in Parliament came to work wearing jeans in solidarity.  Although still social distancing, citizens are encouraged to wear denim with a purpose on April 29 to show their support in ending sexual violence.

For further information on the April 29 concert, visit forallseasonsinc.org, visit For All Seasons Facebook page, or call 410-822-1018.