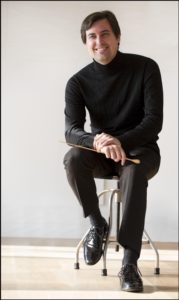 Michael Repper – an internationally recognized conductor, pianist, and recording artist whose mission is to use music as a tool for uniting and inspiring communities – has been appointed music director and conductor of the Mid-Atlantic Symphony Orchestra.

Repper, 31, currently is music director of the New York Youth Symphony at Carnegie Hall, where his recording of works by Jessie Montgomery, Valerie Coleman and Florence Price recently topped the Billboard charts in the traditional classical albums category. He also serves as music director of the Northern Neck Orchestra in Kilmarnock, VA and the Ashland Symphony Orchestra in Ohio, and as principal conductor of the Central Ensembles of Sinfonía por el Perú in Lima, one of the world’s most versatile social impact music organizations.

Earlier, Repper was a conducting fellow and guest conductor with the Baltimore Symphony Orchestra, where the Baltimore Sun praised the “confidence and expressive nuance” of his conducting. He recently earned his doctor of musical arts in conducting degree from the Peabody Conservatory, where his teachers included Marin Alsop and Gustav Meier.

“We are delighted to welcome Michael Repper to the Mid-Atlantic Symphony Orchestra, and are confident he will continue to build its reputation as an exceptional regional orchestra as he inspires and engages both our audiences and the communities we serve,” said Jeffrey Parker, board president. “Michael’s energy and enthusiasm will be readily apparent to those who attend our 25th anniversary season programs, which we will announce in the near future.”

“I look forward to joining the Mid-Atlantic Symphony and to working with its excellent musicians, many of whom I have known for years,” Repper said. “I am particularly excited to meet the enthusiastic audience of the MSO, and to get to know and collaborate with the diverse communities in which it performs. I look forward to energetic performances that feature both familiar repertoire and new music that highlights fresh talent.”

Repper, the Mid-Atlantic Symphony’s third music director in 24 year history, was selected following an exhaustive search by the board, and in consultation with members of the Musicians’ Association of Metropolitan Baltimore, Local 40-543, American Federation of Musicians, which represents the Orchestra’s musicians.

In addition to leading orchestras on four continents, Repper has collaborated on large-scale productions of symphonic and theatrical works with the Weill Music Institute at Carnegie Hall, the Chicago Symphony Orchestra, Ravinia Festival, Peabody Institute, and the New School of Music, among others. An accomplished pianist, he regularly performs as a soloist alongside his orchestras and choruses, and also as an orchestral player. He performed with the Chicago Symphony in its performances of Leonard Bernstein’s Mass, which was broadcast on the PBS Great Performances series.

A native of southern California, Repper earned his bachelor’s and master’s degrees from Stanford University.