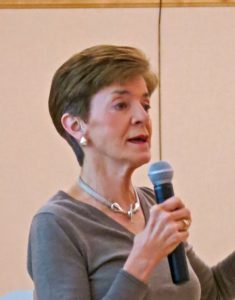 Local, Pulitzer Prize-nominated poet Sue Ellen Thompson’s interview with “Library Guy” Bill Peak will be available Monday, June 1, on The Talbot Spy. Thompson is the author of five books of poetry, including her most recent work, They, which tells the story—through poems and the found poetry of postcards—of the poet’s sometimes troubled relationship with her transgender child, and the connection they find through the author’s father. She also edited The Autumn House Anthology of Contemporary American Poetry.

Garrison Keillor has read more than ten of Thompson’s poems on his Writer’s Almanac radio show. In 2010, Thompson received the Maryland Author Award, which is given once every four years to a Maryland poet in honor of his or her body of work. Thompson lives in Oxford, Maryland.