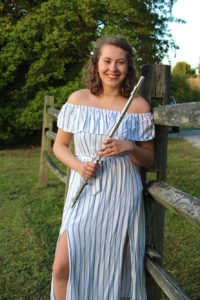 CENTREVILLE — (January 6, 2019) — The All-State Senior Band list was just published and QACPS took top honors, becoming the only Eastern Shore county represented on this years’ All-State list. This is a huge accomplishment for two tremendous band programs at both ends of the district. Queen Anne’s County High are led by Director of Bands Mr. Eric Wright and Kent Island High is led by Director of Bands Ms. Kimberly Mogensen.

“The past five years, I’m fairly certain that only one student from the Eastern Shore earned a spot. In the last ten years, no students from KIHS have earned a spot,” says Ms. Mogensen, “so this is exciting!”

The hard work and dedication paid off for both schools this year, and for Ms. Mogensen, her KIHS senior Ryan Bachman not only earned a spot in the All-State Senior Band—he earned first chair! Sixty trumpets auditioned for the top spot that Ryan earned.

Ms. Mogensen says that Ryan has participated in every music ensemble available at KIHS, from Marching Band as a Drum Major to Pit Orchestra, Jazz Band, Symphonic Band. In addition, he has taken all but one music course offered at KIHS, including Percussion Ensemble, Piano Musicianship and Advanced Placement (AP) Music Theory—even private instruction with a professional trumpet player of the USNA Band.

“We are BEAMING with pride here,” said Mogensen. “We’re ecstatic to send him for this once in a lifetime opportunity. Ryan is an exceptional example to his peers.”

Mr. Wright shared similar sentiments, “It is very exciting that Queen Anne’s County is going to be the county that will be representing the Eastern Shore in the All-State Band.”

Courtney Adams, a senior at QACHS, earned a second chair spot in the All-State ensemble. Courtney has been an active member of the QACHS Lions Band program for the past four years playing flute in Concert Band her freshman year, and in Symphonic Band the past three years. She was also a member of the Marching Lions Band her first two years, before devoting more of her time with the Annapolis Youth Symphony.

“Courtney has also been active in small ensembles and performing solo at our regional and state solo and ensemble festivals. For the past three years, Courtney has also successfully auditioned for and participated as a member of the Maryland Eastern Shore All-Shore Honors Band,” said Mr. Wright. “Courtney is the sixth student that I have had to make it into one of the Maryland All-State Bands during my eighteen years at QACHS. I am very proud of all that Courtney as accomplished and have enjoyed watching her grow as a musician.”

“I applaud Mr. Wright and Ms. Mogensen and all the talented students for their tireless efforts. The Band programs are simply outstanding in Queen Anne’s County, and due to the hard work these two put in, their students and their programs are thriving! I hope everyone in Queen Anne’s County understands the powerful impact the arts have on a students’ overall education,” said Michael Bell, Supervisor of Visual and Performing Arts for QACPS.

In order to participate in the Maryland All-State Senior Band, students must attend an independent (private), parochial, or public school in Maryland, must be in grades 10, 11, or 12, and must be enrolled in a band class. In senior high schools in which an alternative scheduling program is operating, the student may participate in the year in which the student earns a credit.