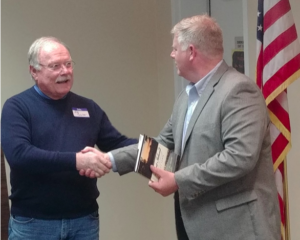 Now in its 50th year, the Queen Anne’s Conservation Association’s (QACA) stated “mission…is to promote stewardship of the county’s natural resources, to protect its rural character and small towns while managing prudent and sustainable growth.” Summarizing QACA’s role, Falstad said, “The thrust of it is, we pay attention to everything going on in the county and we try to keep people informed.” To this end, Falstad provided well-timed information for three concerns in the county and cleared up some crucial confusion during the well-attended club meeting.

Rather than all four phases planned to complete the Four Seasons development on Kent Island, “Only phase one is approved,” said Falstad. Describing it as a common

misconception about the project, Falstad explained, “a lot of people think it’s a done deal, it’s not a done deal,” then adding “they want you to think that.”

Responding to a member’s concern for potential expansion of the Bay Bridge, Falstad stated, QACA is “focused on it like a laser beam” along with several other organizations including the Eastern Shore Land Conservancy.

Falstad described the county’s current comprehensive plan as “excellent” adding there is “no need to make wholesale changes to it.” However, Falstad also suggested, “nothing else has more influence it’s where all decisions are made.” Further adding, “I encourage you to get involved because it’s crucial.”

“Queen Anne’s County must grow to meet the needs of the future while balancing the concerns of traffic, schools, infrastructure, and the environment,” said Jim Coulter, Democratic Club President. “As Jay Falstad so aptly demonstrated, Queen Anne’s Conservation Association is a voice we should listen to as our county plans its future.”

Jay Falstad has served as Executive Director of the Queen Anne’s Conservation Association since 2009. QACA is the oldest land use and conservation organization on the Eastern Shore. Falstad is a passionate conservationist. Currently, he serves on the boards of the Harry Hughes Center for Agro-Ecology and Adkins Aboretum. He’s previously served on the Boards of the Chester River Association and the Sassafras River Association. Falstad holds a Bachelor of Arts from the University of Delaware.