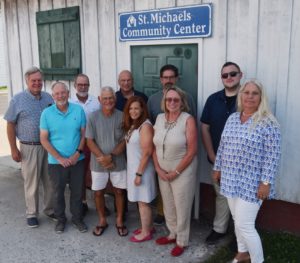 The Community Center is beginning to resume its normal summer programming after serving during the pandemic as the Talbot County designated Bay Hundred Food Distribution Hub, providing tens of thousands of bags of groceries and prepared meals to those in need.

“At the same time we’re planning a major renovation of our building on Railroad Avenue. Our dream is to transform our old lumber warehouse into a modern, efficient facility to better serve our community while becoming a landmark whose vernacular architecture will harmonize with the neighborhood and the historic Union United Methodist Church across the street.”

Treasurer Parker Spurry grew up in Talbot County and now lives in Easton with her husband Joe. Their two grown children are Eliza Spurry, 21—who is studying elementary education and will be returning to her Talbot County Public Schools alma mater as a teacher, and U.S. Marine Corps Second Lieutenant Marine Officer Stewart Spurry, 23—a Virginia Military Institute graduate currently enrolled in The Infantry Officers Course at The Basic School in Quantico, Va.

Spurry studied psychology at Virginia Wesleyan College in Norfolk, Va., before beginning her 35-year banking career with Shore Bank in Accomack County, Virginia. She then worked for Maryland National Bank in St. Michaels before joining Talbot Bank as Assistant Vice President, St. Michaels Branch Manager. Spurry is serving in her 26th consecutive year in the position, with the bank now Shore United Bank.

New board member Chris Agharabi of Easton arrived to the Eastern Shore in 2008 when he and his wife opened Ava’s Pizzeria and Wine Bar in St. Michaels. The restaurant is named after his daughter, Ava, and serves a staple of gourmet pizzas featuring locally produced fresh ingredients, where possible, and a diverse wine and international beer selection.

Agharabi currently owns and operates six restaurants in St. Michaels, Cambridge, and Rehoboth, Del., with ongoing expansion plans. He also has spearheaded local, charitable endeavors including the Maryland Eastern Shore’s Feed the Front Effort during COVID-19, and has been a constant contributor to charities and organizations throughout the communities his businesses serve.

“The St. Michaels Community Center is a great place to bring the community together,” said Agharabi. “Its Treasure Cove Thrift Shop is the first place Ava and her friends want to go when they are in town. In fact, Ava has started her Collection of ceramic chicken bowls from Treasure Cove. I’m eager to help the Center expand and reach its goals while continuing to serve St. Michaels and the Bay Hundred communities.”

Retired Maryland Senator Edward J. Kasemeyer was born in Baltimore City in 1945 and moved to Howard County in 1957. He graduated from Western Maryland College, now McDaniel College, in 1967. Kasemeyer served in the Maryland General Assembly for 32 years, 28 of which were in the State Senate. From 2010 until his retirement at the end of the term in 2018, Sen. Kasemeyer served as Chairman of the Senate Budget and Taxation Committee. Sen. Kasemeyer and his wife have since bought a home near St. Michaels and are in the process of becoming full-time residents. He says a lifelong passion for community service and serving those most in need will continue as he becomes more involved in the St. Michaels community.

“I’m honored to be able to serve on the Board of St. Michaels Community Center,” said Sen. Kasemeyer. “I’m excited about seeing how our services and programs help improve the lives of people in need in St. Michaels and throughout the Bay Hundred area.”

Lori Morris is a life-long Marylander, born in Bowie and attending Prince George’s County Public Schools before earning Bachelor of Arts and Master of Social Work degrees from the University of Maryland, College Park.

Morris serves as Chief of Staff to Maryland State Senator Douglas J.J. Peters, 23rd District. She assists Sen. Peters in his role as the Senate Budget and Taxation Committee’s Capital Budget Subcommittee Chair. She advises the Senator on a full range of issues, represents him in the community, and coordinates all facets of the Senate office’s work. Morris also served as Senate Veterans Caucus and Prince George’s County Senate Delegation staff through her work with Sen. Peters, which began when he served as a County Council member with a focus on education issues.

Morris and her husband, Mark Pelavin, moved to St. Michaels in 2020 and have two adult children. Morris says she looks forward to developing strong opinions about where to get the best crabs, French fries, and margaritas in the area.

“I’m honored to help the St. Michaels Community Center prepare for the future while serving the needs of our community today,” said Morris. “I’m grateful to be of service to such a vital anchor organization for St. Michaels and the entire Bay Hundred area.”

St. Michaels Police Chief Anthony Smith of Tilghman is returning for his second term on the St. Michaels Community Center Advisory Board. Smith is a committed officer with 40 years of experience serving with the Maryland State Police and the St. Michaels Police Department. He received his Bachelor of Science degree from Morgan State University and his Masters in Public Policy from the University of Maryland School of Public Affairs in College Park. He previously served for six-years on SMCC’s Board.

The St. Michaels Community Center’s mission is to serve, empower, and connect the community, with program and building improvement plans dependent on grants and private donations. Donations to SMCC and proceeds from its Treasure Cove Thrift Shop on Railroad Ave. in St. Michaels help the nonprofit provide year-round programs, services, and community events for residents of St. Michaels and the Bay Hundred area. More information is at stmichaelscc.org.