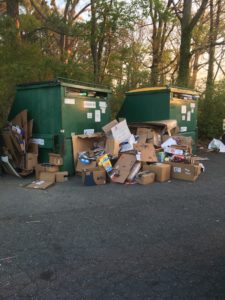 With people ordering more food and staples online due to the coronavirus, Talbot County residents are generating large quantities of cardboard and packaging at area recycling facilities. Because these recycling stations and dumpsters are being overwhelmed with trash, the County may need to shut down its recycling facilities if residents do not comply with the prohibition of leaving trash outside of recycling units and dumpsters.

According to Ray Clarke, Talbot County Engineer, “Throughout Talbot County, recycling bins have been placed in parking lots of parks and businesses.  Some of the heaviest used sites include Perry Cabin Park, and Graul’s Market in St. Michaels, the Amish Market in Easton, the AutoZone parking lot in Easton, bins in the Oxford Park, bins at the Shore Stop in Trappe, along with recycling bins at various firehouses in Cordova and Trappe. Due to residents receiving an increase in shipping boxes, these bins are now full and overflowing regularly.”

Talbot County is one of four counties participating in the Midshore Regional Solid Waste Facility, with the Maryland Environmental Service owning and operating the facility.  The other three Mid-Shore counties include Queen Anne’s, Kent and Caroline counties.  Each fiscal year, Talbot County budgets approximately $10,000 to cover labor and pay the landfill tipping fee after picking up litter left at recycling stations. A portion of the tipping fee assessed per ton of trash is allocated to the Mid Shore Recycling Program, which is also owned and operated by the Maryland Environmental Service. Talbot County has a part-time staff member who works on the Recycling Program for Talbot County, with the Maryland Environmental Service assisting about once per week in cleaning up the recycling sites. Some of the heavier used sites are cleaned up twice a week.

According to Clarke, with the coronavirus pandemic, the amount of cardboard and trash being left at the recycling station is increasing daily.  This increase of trash being illegally dumped and recyclables being left outside of recycling bins is being blown around the recycling sites, as well as off-site, creating litter throughout the County.

“Also, this increase in illegal dumping of trash and leaving recyclables out of bins is now resulting in increased labor and landfill fees, which is impacting the County’s budget for cleaning up sites. Incurring additional costs during this time is especially difficult as our County budget is addressing so many other needs related to the impact of the coronavirus,” comments Corey Pack, President of the Talbot County Council.

To deal with the increased volume of recycling materials, the County is asking residents to hold onto their recyclables until the recycling bins have been emptied. Placing recycling materials on the ground is littering and violators are subject to the appropriate fines. The County is encouraging citizens to take pictures of the vehicle license plates of people leaving trash on the ground and to forward these pictures to either rclarke@talbotcountymd.gov or dbrummell@talbotcountymd.gov. The names of individuals and businesses leaving boxes with mailing labels outside of recycling bins will be forwarded to the Talbot County Sheriff’s Office for enforcement action.

Clarke states, “The Maryland Environmental Services has installed signage to warn the public about leaving recyclables and trash on the ground in hopes of reducing the littering that is occurring. We need every citizen in Talbot County to help us with this effort by being patient and responsible with their trash and recyclables.”

For further information about the Recycling Program for Talbot County, contact Ray Clarke, Talbot County Engineer in the Department of Public Works at 410-770-8170 or rclarke@talbotcountymd.gov.