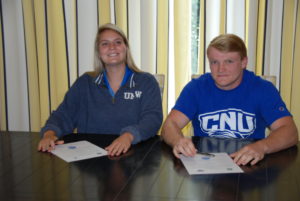 Gunston is proud to announce that two student-athletes have signed commitment letters to play collegiately, beginning with the 2019-20 academic school year.
Cole Evans will continue his lacrosse career at Christopher Newport University beginning this fall. Evans was nominated the 2019 ESIAC Boys’ Player of the Year for his senior season, served as a captain of the boys’ lacrosse and soccer programs and was an ESIAC Lacrosse All-Conference player in each of his four years. He will finish his Herons lacrosse career with more than 200 points. He is a member of the National Honor Society, Gunston’s honor roll, and serves as the senior class Vice-President
Nellie Stup signed with the University of Mary Washington. Stup was an ESIAC Lacrosse All-Conference selection for her four-year career, served as a captain of the lacrosse team for three years, and was a key member of the 2017 Capital Area Lacrosse League Championship team.  She was selected to the 2017 Brine All-American National Classic and was an all-star team selection at the 2017 Warrior National Prospect Invite. She is a member of the National Honor Society and Gunston’s honor roll.