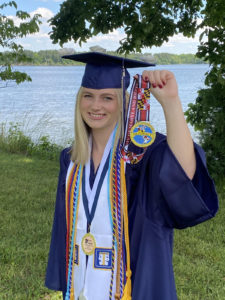 STEVENSVILLE — (June 10, 2021) — There’s something to be said for back-to-back champions, but to “three-peat” with a record-breaking twenty-six Maryland State Seal of Biliteracy Earners at both high schools during a global pandemic—now that’s something to celebrate!

Two years ago, the Maryland Seal of Biliteracy was the “new game in town” for the World Language programs in Queen Anne’s County. It was first introduced when Supervisor Michael Bell joined forces with Kent Island High (KIHS) World Languages Department Chair Lori Heggelke to bring this opportunity to Queen Anne’s County students. Bell commemorated the first Seal earners by interviewing students at both KIHS and QACHS back in 2019, and it’s a tradition he plans to revive next year, post COVID-19.

“This award is truly special,” said Supervisor Bell. “It not only celebrates seniors who have attained high levels of proficiency in one or more languages in addition to English—it puts every future employer on notice that these outstanding students are ‘biliterate’. What a huge draw!”

Students earning the Maryland Seal of Biliteracy receive a medal, special recognition at senior awards ceremonies, a gold seal is affixed on their diploma and a special designation on the students’ transcripts so that every college knows the student has earned this prestigious distinction.

“This group of students earning the Maryland Seal of Biliteracy is especially impressive for a number of reasons,” Sra. Heggelke explained. “As in years past, the group consists of some students that have learned Spanish as their second language, and others that have learned English as their second (or third) language!  However, this is our largest group of qualifiers to date, since we started awarding the Seal in 2019.”

Sra. Heggelke translated: “It was difficult at the beginning but once a second language is learned, it is like owning a new soul.”

KIHS senior Rachael Michalski shared similar sentiments. “Being awarded the Seal of Biliteracy is one of my proudest accomplishments. It is a great honor to have been able to learn the Spanish language, as the knowledge allows me to communicate with other people of a different culture. My career goal is to become a criminal lawyer, and having the Seal of Biliteracy on my record opens up so many doors into my future. I couldn’t have received such an accomplishment without my parents, previous Spanish teachers, Mr. Michael Bell and Mrs. Lori Heggelke.”

KIHS senior Donna Long shared, “Earning the Seal of Biliteracy was important to me because it means I can not only travel to so many countries and connect with so many people, but I also have an understanding with so many in my own country as well. I love the opportunity to connect and grow that earning the Seal has provided me.”

David Stricker is a Spanish teacher, Head Wrestling Coach and the World Languages Department Chair at Queen Anne’s County High (QACHS). He also got students in on the action, and helped to increase the number of QACHS students taking the AAPPL test to earn the Seal of Biliteracy. “Earning the Seal of Biliteracy opens a world of possibilities not available to the average student,” said Stricker. “Companies, colleges, the military—all reward those that can speak another language. Knowing a second language at such a young age can help propel students into an amazing future.”

QACHS senior Grace Findlay shared, “It’s important to me that people strive to learn about cultures and people other than their own. Language holds a key place in the heart of culture, and learning a new one allows you to learn about not only a new culture and society but also about yourself and who you truly are.”

The AAPPL test (ACTFL Assessment of Performance toward Proficiency in Languages) is the web-based proficiency and performance assessment of K-12 standards-based language learning used to assess tasks across the three modes of communication, as defined by the World-Readiness Standards for Learning Languages, which are: 1) Interpersonal Listening/Speaking; 2) Presentational Writing; and 3) Interpretive Reading and Listening. Bell has since written a grant to pay for all QACPS students to have equitable access to taking the AAPPL exam in French and Spanish 3, 4, Advanced Placement (AP), and Spanish for Native Speakers courses, so the number of students earning the Maryland Seal of Biliteracy will continue to rise.

The Kent Island High School 2021 Seal of Biliteracy earners are: